Normcore? Please, Quakers were doing that in 1650…

While hanging out on a friend’s back porch, someone brought up the topic of “normcore,” the fashion trend that fashion trendy people are trending. The basic gist of the movement appears to be abjuring from logos, symbols, styles, and other denotata of other fashion trends (Newsweek 2014). Adherents select the ONE kind of shirt, jeans, etc. that are perfect in functionality and comfort, not attuned to high fashion trends. 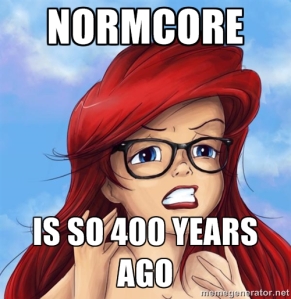 Fiona Duncan (2014) refers to it as “self-aware, stylized blandness… [manifesting] itself in ardently ordinary clothes.” Blank sneakers, jeans, fleece jackets, and plain t-shirts abound, making it difficult for Duncan to discern, from behind, hip 20-somethings from middle-aged tourists. The Guardian (2014) even suggested that the movement makes Larry David a style icon. Several sources point to a trend forecasting group in New York City, known as K-Hole, as helping to define normcore. While the above consists of what others have been saying about it, a recent post on K-Hole’s Facebook page suggests that Duncan’s article (and, therefore, likely several others’) conflates normcore with “Acting Basic,” which is some other fashion trend that I’m not going to get into right now.

My points here are thus:

1) Whatever you call it  (normcore or Acting Basic), the trend seems to revolve around the purposeful rejection of labels and fashion on the grounds of them being devoid of meaning, of being merely fashion and subject to change. By rejecting it, the adherent is projecting an image of substance over style, of being a deep, thoughtful, and value-oriented person, not a glitzy label-hound. We’ll leave aside the star-collapsing-on-itself quality of deliberately fabricating an image of unfabricated depth for now. I’d rather move on to my other point.

2) People call this a new trend. I call shenanigans on that. Other groups besides the fashion-oriented of the modern day have deliberately constructed their wardrobe to be plain and avoid popular symbols, though frequently on religious grounds. I’m focusing on the Quakers, because I know them best, though the Amish, Mennonites, some orthodox Jewish circles, and a number of other congregations could fall under this category.

When Quakers got rolling in the mid-17th century, people dressed much as their neighbors did, as the movement was figuring out what it was all about. However, within a few decades, adherents began preferring black or gray outfits, very plain in construction, with hats and bonnets. Quakers became recognizable for their drab garb, and remained visually distinct for well over a century. Some among us continue to embrace a version of plainness in their personal sartorial choices. The image of the drably-attired Quaker carries on in the very-much-not-Quaker corporate icon for Quaker Oats, who appears in a black coat, black breeches, black vest, and black hat.

The justification for this attire was that the bold colors and changing patterns of the non-Quaker world were merely worldly fashion, and were not just devoid of meaning, but were counter to living an observant life, as an obsession with fashion distracted from attention to God. Wearing self-effacing garb was meant to betoken one’s obedience to a deeper, holier realm of life. There is a parallel here between really old Quaker fashion, born of religious ideals, and secular normcore.

But, that religious/secular divide creates an important difference, too. While Quakers of yore dressed plain to signal to others that they were obedient to Quaker discipline, the clothes were also a reminder to the wearer of their place in the world and the “dangers” of worldly fashion. Be it pollution, sin, or however else they chose to frame it, worldly fashion was a threat to the holy life that they sought to live in. Normcore (or Acting Basic) is strictly a fashion trend, and is primarily about signaling to others that you’re cool be being uncool. It is outwardly-directed, and lacks an inward mortification that religious plain dress entails.

Now, before I close, I would like to point out that not all Quakers wholeheartedly embraced the idea of plain dress. Margaret Fell, one of the most influential of early Quakers and eventual wife of the founder, George Fox, called it “silly poor gospel” and she and Anthony Benezet (a relative of mine, actually) believed that scrupulous attention to plain dress could distract from actual inward piety. Still, it remained a hallmark of Quaker life into the twentieth century… HUNDREDS OF YEARS before normcore became an ironic thing.

View all posts by Carl Drexler